God’s Story for Us

What story is God writing for your life? God is the Author of our life’s story. He penned an amazing story for each of us before He even breathed life into us. He mapped out our journey with Him from beginning to end.

Are we following His journey? Is His story unfolding as He planned for us? Perhaps we’re experiencing unexpected plot twists… dramatic chapters…. surprise turns of events. We question God’s care and concern for us when our story seems to veer off course.

We all have chapters we don’t read aloud. Chapters that are between us and God. Chapters that are covered by the blood of our Savior. These chapters do not define God’s story for us. They do not define who we are… who He created us to be. God’s story for us is one of love and redemption. We keep our faith strong, trusting in the Author of our lives.

“As for you, you meant evil against me, but God turned it into good in order to bring about this present result, to save the lives of many people.” — Genesis 50:20

We see God’s story of love and redemption unfold for Joseph in the Book of Genesis. It begins as a story of love… and appears destined for a happy ending. Although there are a number of plot twists and turns along the way, Joseph’s faith in God is never shaken.

Joseph, the hero of the story, is a man of great faith in Yahweh God. The first of two long-awaited sons of Jacob’s beloved wife Rachel, he is the apple of his father’s eye. He can do no wrong. Jacob gifts to Joseph a coat ornately woven of many colors as an expression of his great love for him. This marks a turning point in Joseph’s ideal early life.

Joseph’s ten older brothers enter the scene… Jealousy arises in them because of their father’s favoritism toward this special son. Young Joseph cavalierly shares with his brothers his prophetic dreams where they are bowing before him. The plot thickens… Envy clouds the brothers’ thinking. While out shepherding, they meet upon a  caravan of Ishmaelites. They sell Joseph to the traders who proceed to resell him into slavery in Egypt. Joseph’s brothers tell their father that his adored son has been killed by a ferocious animal.

“The Lord was with Joseph so that he prospered… the Lord gave him success in everything he did.“ — Genesis 39:2-3

The theme of love and redemption runs throughout this story. God has not forgotten Joseph… and Joseph has not forgotten God. Joseph has courageous faith that His Yahweh God will always be with him. The young Hebrew becomes a slave in the home of Potiphar, Pharaoh’s captain of the guard. The Lord blesses Joseph in all he does. Finding favor in the eyes of Potiphar, Joseph is put in charge of everything his master owns. The blessing of the Lord is upon Potiphar because of Joseph. Yet the plot twists… Potiphar’s wife enters the scene. When her passes toward the young Hebrew slave are rebuffed, she betrays Joseph, causing him to be thrown into prison.

“The Lord was with Joseph and gave him success in whatever he did.“ — Genesis 39:23

We see here a recurring theme… The Lord is ever with Joseph, giving him success. Joseph wins the favor of the prison warden and is placed in charge of all the prison’s affairs. With divine inspiration, Joseph interprets prophetic dreams of both the king’s chief cupbearer and the king’s baker. The story’s hope rises… The royal cupbearer is to be reinstated. Joseph asks to be remembered by him and set free from prison. Yet all hope is dashed when Joseph is forgotten. Two years pass… still Joseph’s mighty faith in God never wavers.

“Since God has made all this known to you, there is no one so discerning and wise as you.” — Genesis 41:39

Pharaoh has prophetic dreams that no one in Egypt can interpret. A surprise turn of events… Joseph is remembered, and gives his God-inspired interpretation of Pharaoh’s dreams. Egypt is prophesied to experience seven years of plenty and seven years of famine. Pharaoh places Joseph in charge of all of Egypt to prepare for the times of famine ahead. When the dire times arrive, all the surrounding countries come to Egypt to buy food.

Joseph’s ten older brothers enter the scene once again… Their father Jacob sends them on a journey to Egypt to buy food for the family. Upon meeting the governor of Egypt, they do not recognize Joseph as their brother. They all respectfully bow down before him… in fulfillment of his earlier dreams. Joseph does not initially reveal his identity since he wants to test his brothers. He asks that, upon their next journey to Egypt, they bring along Benjamin… Joseph’s beloved younger brother and second son of Rachel.

“God sent me ahead of you to preserve for you a remnant on earth and to save your lives by a great deliverance.” — Genesis 45:7

When the ten return with Benjamin, Joseph sees that they have had a change of heart. He tells them that he is their long lost brother. The ten are terrified that Joseph will use his power to retaliate against them for their earlier betrayal. Yet Joseph assures them of his complete forgiveness. He explains that it was God, not his brothers, who sent him to Egypt to prepare the way for their deliverance. Pharaoh invites Joseph’s family to come to Egypt where the best of the land will be theirs.

“God causes all things to work together for good to those who love God, to those who are called according to His purpose.” — Romans 8:28

Throughout God’s story for Joseph, His love never changes… and Joseph’s love for God never wavers. How many times in the chain of events of Joseph’s story would he have been tempted to give up? How many times might he have felt forgotten and abandoned by the Lord? Yet God’s story would have a happy ending. Joseph places his utmost faith in his Yahweh God that He would deliver him. His Lord would work all the evil perpetrated against him for Joseph’s good and the good of God’s people.

Are we tempted to give up on God’s story, His plan because the plot twists and turns seem more than we can bear? Yet God’s story for us, like Joseph’s, is one of love and redemption. We are never alone. If we keep our courageous faith in our mighty Lord, He will keep our story on track and lead us to a glorious ending. He promises to work whatever evil comes against us for our good. We yield to the Author of our life’s story to forever love us and redeem us. 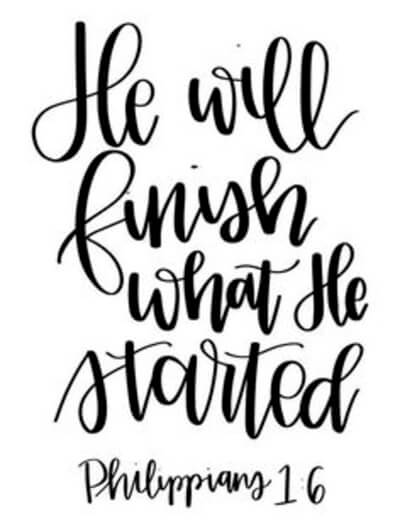