“I looked for someone among them who would build up the wall and stand before Me in the gap on behalf of the land so I would not have to destroy it, but I found no one.” — Ezekiel 22:30

It is a dark time in the history of Israel. The nation of Judah has fallen out of favor with God… and its people are steeped in corruption and sin. Who will stand in the gap before God? No one can be found dedicated to His cause… one with the faith to intercede in prayer for His chosen people… one to lead them back to Him.

There is no longer a “wall” of faithful people who can step in and resist the evil so prevalent in the land. Sin has broken down the wall and infiltrated the morals and values of the nation. Evil has permeated the ranks of the leaders. All in power have fallen away from God’s path, leading astray His chosen ones.

Despite God’s merciful attempts to spiritually cleanse the nation of its sins… and despite the warnings to the people by His true prophets… there is no change of heart, no repentance. His people remain unfaithful and stand to reap the consequences of their wrongs.

“They forgot God their Savior… Therefore He said that He would destroy them, if Moses, His chosen one, had not stood in the gap before Him, to turn away His wrath from destroying them.” — Psalm 106:21, 23

It is a trying time in the wilderness of Sinai earlier on in Israel’s history. God’s chosen people have forgotten the One who had been their mighty Deliverer. Time and again they complain and rebel against their faithful God. And time and again He steps in and exhibits His grace and mercy. Yet one act of rebellion ignites His wrath. His people choose a powerless golden idol to worship instead of Him.

Who will stand in the gap before God? Moses heroically steps forward at this key time in their wilderness journey. This great leader, chosen and anointed by God, entreats the Lord on behalf of His people. Courageously Moses intercedes, bridging the gap between a holy God and a sinful people.

“Remember Your servants Abraham, Isaac and Israel, to whom You swore by Your own self: ‘I will make your descendants as numerous as the stars in the sky and I will give your descendants all this land I promised them, and it will be their inheritance forever.’” – Exodus 32:13

“Then the Lord relented and did not bring on His people the disaster He had threatened.” – Exodus 32:14

God’s deep love for His people causes His intense opposition to their sin. For He is the Holy One who loves the sinner yet hates the sin. Idolatry had breached the wall, allowing the encroachment of evil into their society.

By standing in the gap before God and interceding for the people, Moses makes a difference in the lives and the future of the Israelites. His prayers build up a wall of faith… turning away God’s righteous anger and saving His chosen ones from destruction.

“Let us come boldly to the throne of grace, that we may receive mercy and find grace to help us in our times of need.” – Hebrews 4:16

Jesus Christ is our great Intercessor. Day by day… moment by moment… He stands in the gap on our behalf before the Father. On the cross, God poured out His wrath against sin upon our Savior. Christ bridged the gap between sinful man and a holy God.

Jesus has made us worthy in the eyes of the Father. He opened the way for us to come confidently before God’s throne. Because of His sacrifice, and in His name, we can intercede for those in our world who need God’s mercy and grace.

God is asking if there is anyone who will stand in the gap before Him. We can intercede on behalf of… a loved one who has wandered from the Lord… a family member who is battling the enemy in their life… a friend who is plagued by sin… any who need the mercy and saving grace of God. We can pray for all who need the salvation that only the Lord Jesus Christ can offer.

As we pray for those in our world, we can remind God of His eternal promises… to always be with us… to never leave us or forsake us. His promise to hear our prayers when we call to Him. His promise to be a Warrior God… a Deliverer… a Savior… a Protector… a Loving Father… to those for whom we pray.

God wants us to be intercessors. He desires to work through our prayers. He longs that none should perish but that all come to repentance (2 Peter 3:9). And He is looking for people of faith who will step out in boldness and change their world with prayer.

Will we stand in the gap before God? Will we step out with courageous faith and intercede on behalf of those in our world? Will we seek to make a difference with our prayers?

A Life of Reverence 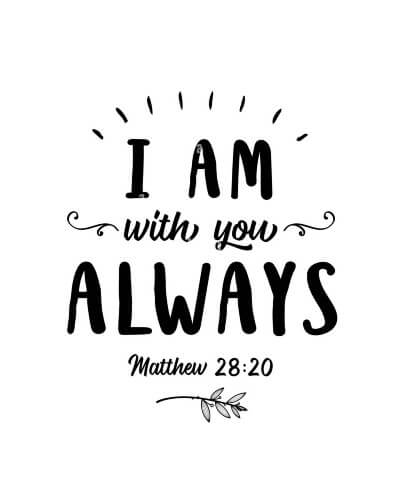